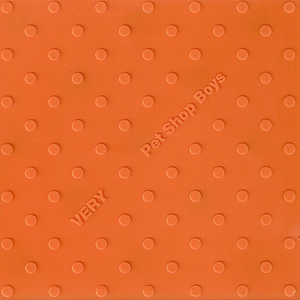 Very is the fifth studio album by English electronic duo Pet Shop Boys. It was released in September 1993, after nearly two and a half years from the duo's previous studio album, Behaviour, and the compilation album Discography: The Complete Singles Collection. Very has sold more than five million copies worldwide, and contains five UK singles. Very exhibits one of many turning points the Pet Shop Boys would make to their music, shifting from the subdued electronic pop of Behaviour to richly-instrumented dance arrangements. The content and lyrics led to Very being called their "coming-out" album, since it was during this time that Neil Tennant had publicly discussed his long-rumoured homosexuality. A limited edition of Very was also released as a double album titled Very Relentless. The second disc, Relentless, was a six-track dance album containing tracks that are more experimental and instrumental. There were plans to expand upon Relentless in 1994 by releasing the six tracks along with others, making a full dance album, but this evolved into Disco 2. The six tracks on Relentless have not been released elsewhere since (though the original version of "Forever in Love" is found on Very/Further Listening 1992–1994 as track 2). The original release of Very was packaged in a unique orange jewel case with raised bumps (sometimes unofficially described as the Lego case), designed by Daniel Weil of Pentagram in London. Very Relentless was similarly unique, with the two CDs housed in card sleeves (Very in orange and Relentless in pink) with both of these housed in a translucent rubber case with raised bumps. The album was reissued in 1996 as a mid-price release, this time in a standard jewel case with a new sleeve showing an image of the original case. Very was re-released on 3 July 2001 (as were most of the group's studio albums up to that point) titled Very: Further Listening 1992–1994. The re-released version was digitally remastered and came with a second disc featuring B-sides and previously unreleased material. The unreleased songs were recorded during the Very recording sessions, but Tennant and Lowe decided not to include them on the album originally. On 9 February 2009, the album was re-released yet again, still remastered, under the title "Very: Remastered" but this time containing only the 12 original tracks. Following the 2009 re-release, the 2001 2-disc remastered version was deleted and remains out-of-print to date. It can only be purchased second-hand or MP3 digital download. In June 2000, Q magazine placed Very at number ninety-one on its list of The 100 Greatest British Albums Ever.[4] It is also included in the book 1001 Albums You Must Hear Before You Die. User-contributed text is available under the Creative Commons By-SA License; additional terms may apply.