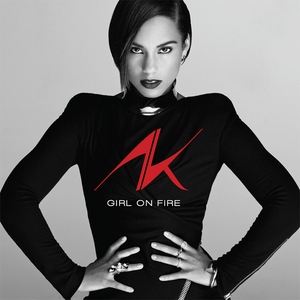 Girl on Fire is the fifth studio album by American recording artist Alicia Keys. The album, which was released on November 22, 2012, is Keys' first release with RCA Records following Sony Music Entertainment's decision to close J Records during a company reshuffle. Girl on Fire was conceived shortly after Keys' marriage to record producer and rapper Swizz Beatz as well as the birth of her first child Egypt. The title track became the album's lead single, and has peaked at eleven on the Billboard Hot 100. The album debuted at number one on the US Billboard 200 chart with first-week sales of 159,000, becoming her fifth number-one album in the United States. Singles The album's title song was unveiled on September 4, 2012 as the album's first single.[25] Recorded as a three part suite, "Girl on Fire" was accompanied by an "Inferno Remix" featuring Trinidadian rapper Nicki Minaj and a "Bluelight Remix" which features Keys' singing the song in a stripped back production. The song was composed by Keys, Jeff Bhasker and Salaam Remi. American rock guitarist Billy Squier is also credited as a writer due to "Girl on Fire" including a music sample of the drum track from his song "The Big Beat" (1980).[26] Keys performed the song for the first time at the 2012 MTV Video Music Awards on September 6, 2012. She was joined by Minaj and the 2012 Summer Olympics gymnastics gold medalist Gabby Douglas, who made a special appearance during the performance.[27] In the United States, "Girl on Fire" has peaked at two on Billboard's Hot R&B/Hip-Hop Songs and eleven on the Billboard Hot 100.[28] On November 19, 2012, "Brand New Me", which was co-written with Scottish singer-songwriter Emeli Sandé, impacted on urban adult contemporary radio in the United States as the album's second single. User-contributed text is available under the Creative Commons By-SA License; additional terms may apply.