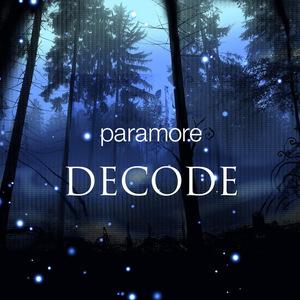 "Decode" is a song by American rock band Paramore for the soundtrack of the 2008 romantic fantasy film Twilight. It was written by group members Hayley Williams, Josh Farro, and Taylor York. The song was first made available October 1, 2008 through Twilight author Stephanie Meyer's website. "Decode" was promoted to American modern rock radio by Fueled by Ramen and impacted on October 21, 2008, serving as the soundtrack's lead single. It is also included as a bonus track on the international version of Paramore's third studio album, Brand New Eyes (2009). "Decode" was an international commercial success, charting in the top 20 of the singles charts in Australia, France, and New Zealand, as well as earning the band their second top 40 hit on the Billboard Hot 100. The song was certified Platinum in the United States on February 16, 2010, selling over 1,000,000 copies. It was also nominated for a Grammy Award in 2010 in the category of Best Song Written for a Motion Picture, Television or Other Visual Media. User-contributed text is available under the Creative Commons By-SA License; additional terms may apply.