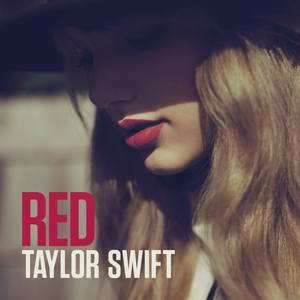 Red is the fourth studio album by American singer-songwriter Taylor Swift. It was released on October 22, 2012 through Big Machine Records, as the follow-up to her commercially successful 2010 album Speak Now. It was announced through Swift's live webchat on August 13, 2012, in which she revealed the album title, album cover, as well as answered fan questions. Four promotional singles were released in the month leading up to the album release, three of which debuted inside the top ten of the U.S. Billboard Hot 100. The album features collaborations with new producers and guest artists such as Gary Lightbody and Ed Sheeran, and sees Swift experimenting with new musical genres. The album's lead single, "We Are Never Ever Getting Back Together" was a worldwide commercial success, topping the iTunes charts all over the world and sold 623,000 copies in the first week, becoming Swift's first ever Billboard Hot 100 chart-topper after vaulting from 72 to number one and stayed at top for three weeks. Even though she usually doesn't discuss who her songs are about, Swift told Broadway's Electric Barnyard that she would agree to disclose the inspiration for "We Are Never Ever Getting Back Together" for a six figure donation to charity. Following in the footsteps of one of her idol's, whom she mimics quite often, Carly Simon. The second single, "Begin Again" was released in October 1. Red has also spawned three other promotional singles, all of them reached top 15 on the Billboard Hot 100 chart. Red has been mostly acclaimed by music critics, who praised Swift's versatility as a musician and enjoyed her experiments with new music genres. Red sold 1,208,000 copies in its first week in the U.S, debuting at number one on the Billboard 200 chart, and scored the highest number one debut in the US for the 2010s decade so far. Red is also Swift's first chart-topper in the U.K., and also topped the album charts in Australia, Canada, Ireland and New Zealand. User-contributed text is available under the Creative Commons By-SA License; additional terms may apply.