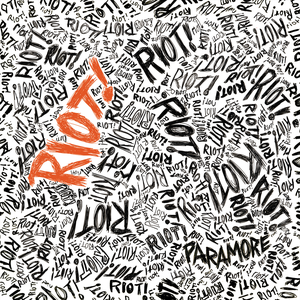 Riot! is the second studio album from rock band Paramore, succeeding their debut album All We Know Is Falling, and was released in the United States on June 12, 2007 and in the United Kingdom on June 25, 2007. The album was certified platinum in July 2008 by the Recording Industry Association of America (RIAA), and Gold in the UK and Ireland. Riot! produced 4 singles: "Misery Business", "Hallelujah", "Crushcrushcrush" and "That's What You Get". "Misery Business" is included in the video games Saints Row 2 and Guitar Hero World Tour (the latter featuring a computer-generated replica of lead vocalist Hayley Williams), while "That's What You Get" is a playable song on Rock Band 2. "Crushcrushcrush" is featured on Guitar Hero On Tour: Decades and is available as a downloadable track for play on both Rock Band games. A cover version of that song is also featured on the game Ultimate Band. The album was produced by David Bendeth. Lead vocalist Hayley Williams explained the album was called Riot! because "For us, the title ‘Riot!’ literally means an unbridled outburst of emotions. When we were writing, it seemed like our thoughts and emotions were coming out so fast that we couldn't control them. It felt like there was a riot within us. So the album takes our passion to a new level; it’s just all raw energy." The track "For a Pessimist, I'm Pretty Optimistic" comes from what lead guitarist Josh Farro reflects as "putting your faith in someone and they blow it." Farro composed the song and gave the demo to Williams. Farro is known as saying "I wrote the music specifically to be awesome live and to be extremely energetic. It all came out at once. I showed it to Hayley and she just nailed it lyrically. She completely got the feeling I wanted the song to have." During production, Paramore held an online contest entitled "The Last Song You'll Ever Sing" where fans submitted videos on YouTube for the opportunity to sing back-up vocals on the track "Born for This". The winner was Mary Bonney of McLean, Virginia. On "That's What You Get", Steven from Steven's Untitled Rock Show is featured and is credited. The band asked him when he went to the studio. The album has yielded four singles, with "Misery Business" being the first. Its origins came from a message Williams posted on the band's Live Journal, asking fans to post what they're ashamed of. "I found that people really were reaching out to someone to spill their guts to," she recalls, "so I did the same thing lyrically in the song and let everything out. It's more honest than anything I've ever written, and the guys matched that emotion musically." The song became an instant hit, eventually receiving heavy rotation on MTV and other music television networks. The album's second single was "Hallelujah". As Williams recounts, "It's one of the oldest songs we've got, but we wanted to save it for this record, and it's the perfect home for it. It's a claim of victory for both ourselves and our fans." The album's third single was "Crushcrushcrush" and was released January 15, 2008, in the US and the January 23 in the UK. The album's fourth single, "That's What You Get", was released just over a week after Paramore canceled their European tour to work on "personal issues", amidst media speculation of the band breaking up. Williams explained that, given the fragile state of the band, they all thought it best if they kept the shoot low-key, surrounding themselves with their friends and family, keeping it simple. Williams added, "We had tons of friends there, and it really just felt like a hangout session. And Marcos [Siega, the director] was so cool about it. He said, 'Bring your friends.' We shot it in some of our friends' houses, and it just felt so real... and I think it's the first time in a video you're gonna get to see who we really are." The track "Born for This" contains elements from the song "Liberation Frequency" taken from the album The Shape of Punk to Come by the influential Swedish hardcore band Refused. User-contributed text is available under the Creative Commons By-SA License; additional terms may apply.