NEW ALBUM 'SAMIZDAT' OUT NOW! Aroma Di Amore is a group that made a trademark out of their biting and politically inspired lyrics. From the liner notes of the compilation album "Radikal", published in 1993 : "Aroma di Amore have always been outsiders, even within the confinement of the alternative rock circuit. Their peculiar blend of raw guitars, electronics, Dutch lyrics and unconventional song structures was too hybrid for many. Those however who 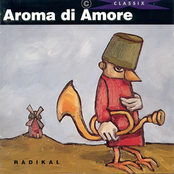