Formed by teenage best friends Cleo Tucker and Harmony Tividad in 2013, Girlpool evolved dramatically in a relatively short time frame. The band grew from a sparse drummerless duo on their earlier releases (the self titled EP in 2014, and their 2015 debut album "Before the World Was Big") into something resembling a more traditional indie rock act on subsequent records like 2017's "Powerplant", and 2019's "What Chaos Is Imaginary", borrowing angst 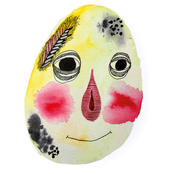