Haysi Fantayzee were a British new wave band of the early 1980s. Formed and fronted by white dreadlocked singers Jeremy Healy (also known as Jeremiah) and Kate Garner, and with Kate's boyfriend songwriter/producer/manager Paul Caplin in the background, the band had several UK hits in 1983 such as the singles John Wayne Is Big Leggy, Shiny Shiny, and Sister Friction. The band never broke through to the same kind of success in the US, although they did have some popularity there. 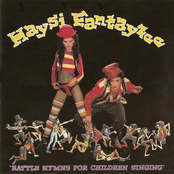