Magic Bullets is a pop band from San Francisco, California. Magic Bullets formed in San Francisco, California in 2004 with musicians primarily hailing from the Bay area who had spent most of their musically formative years playing with or alongside one another in various punk rock outfits. Vocalist Philip Benson and guitarist and primary songwriter Cunningham first met in 2000 and later played together in The Cosmos (a musical project of Cunningham's 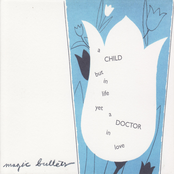 a Child but in life yet a DOCTOR in love

All Wrong and the Plans Change