Minor Detail are NOT A Dublin-based punk band... Minor Detail was headed by brothers John and Willie Hughes. Their lyrical themes were positive oriented covering topics such as romance and peace. Their self titled album was produced by Bill Whelan (later of Riverdance fame), and became the first Irish band to secure a recording contract with an American label. However, they were short-lived, splitting in 1984, and reunited for a brief period in 1986-87. 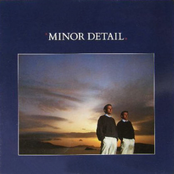