The lyrical and musical talent that Pato Pooh possess, is far beyond his 23 years of age. He has in a short period of time managed to make a name for him in the Swedish hip hop and r&b scene and by doing so proving that he is really is one to look out for. Over the past few years he has built a reputation for himself as a notable performer and songwriter. He has performed in many of the top stages and cities of Sweden. Among those include winning several competitions such as Stockholm’s best -hip-hop/R&B 2002 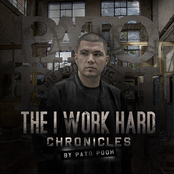 The I Work Hard Chronicles