In 1979 Robert Hazard recorded a demo of the song "Girls Just Want To Have Fun". Which was later re-recorded by Cyndi Lauper, who made the song a hit in 1984. This was followed in 1981 by demos of the songs "Escalator of Life" and "Change Reaction". These two songs received extensive radio airplay in Philadelphia. Around this time, Kurt Loder from Rolling Stone magazine chanced upon a performance by Robert Hazard and the Heroes at a Philadelphia club. 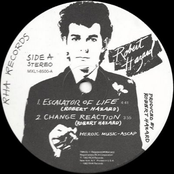 Robert Hazard and The Heroes