Often compared with such fierce and striking artists as Karen O, Siouxsie Sioux, and Chrissie Hynde, Roxy Epoxy made a impact on punk and New Wave music in her former band, The Epoxies. Roxy has embarked on the next chapter of her musical career with a new band, Roxy Epoxy And The Rebound, formed in 2008 in Portland, Oregon. Their new album Band-Aids On Bullet Holes got released on March 10, 2009 by Metropolis Records. “I think The Rebound are a bit more introspective than The Epoxies,” explains Roxy. 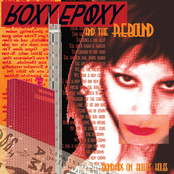