The Jaguar Club is a trio from Brooklyn, New York, who formed shortly before New Years Eve 2006. Prior to an initial split in 2010, the band released 2 EP's and an LP. In 2014 The Jaguar Club reformed with an expanded/altered lineup and a new release on the way. 2008 primarily found the band in a barn in upstate New York writing and recording their first full-length album at Marcata Recording. Their 2009 full-length debut album And We Wake Up Slowly captures the band breaking free of what had become their signature New Wave influenced sound 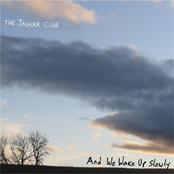 And We Wake Up Slowly