Described as "what The Mars Volta would sound like if they were a surf band," The Reigning Monarchs are a four-piece surf punk band from North Hollywood, California. Co-founded by guitarists Greg Behrendt and Mike Eisenstein in 2007, the current lineup also includes bassist David Hawkins and drummer Blair Sinta. The band's self-titled first album came out in 2009, and was followed up with a two-song Split 7" with Laramie Dean in 2010. In July 2012 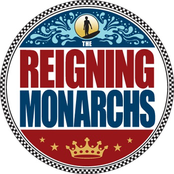