Torgeir Waldemar took the Norwegian people and music press by surprise with his eponymous debut album in 2014. Who had thought that the black-clad, longhaired and bearded man would deliver an album that captivated and moved us as much as it did. An acoustic masterpiece that sounded like it came straight from the rehearsal room of a young troubadour from Laurel Canyon in the seventies. While his previous album cultivated a pure, acoustic sound, we get more rock music this time, and for Torgeir Waldemar nothing is more natural. 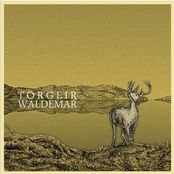